Last week was VBS week and we went camping (not really, if you know me you know that would never happen!)! We spent time in God's Big Backyard: Under the Stars learning about serving others. And of course, we played every glow stick game that I could find, because what is a camping trip without a glow stick? Bible stories in our tent and working in our books were interspersed with Glow Stick Bowling and Glow Stick Ring Toss games, yummy snacks, music time, and plenty of fun! 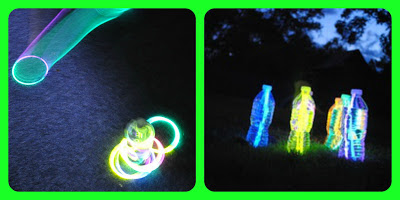 If you have kids and you need cheap, easy summer fun, here are 2 games that we played that were a hit. For the ring toss, we used a bottle filled with water as our target, and tossed 2 glow bracelets hooked together to make a larger circle, trying to get them over the bottle. If you want to bowl, simply activate a glow stick, drop it in a bottle filled with water (you'll need at least 6 of these "pins") and grab a ball! (Hint: The Dollar Store carries glow sticks but not in great quantity packs. Walmart has the best price on multi-packs of glow items, they are located in the party section, near all of the prize bag stuff. I think that I paid $1 for 8 sticks and $1 for 15 bracelets.).

We played inside with the lights off since it wasn't quite dark enough outside during VBS time, but you would be the coolest Mom if you pushed bed time to a little later and let your kids play these outside in the backyard!

P.S. Put your glow sticks/bracelets in the freezer after you play, and you will be able to reuse again!

Posted by Stacie at 6:00 AM
Labels: Crafts, DIY, Family and Friends, Pinterest

I love this!! My kids love glow sticks!!

how cool love this

oh I think this would be so fun!! I'm not big into camping either-- like have you seen that commercial of the wife who calls to check on her hubs who just spent the night out in the backyard on the hard ground? I guess its fun for kids-- but I don't think I can handle it-

No way, had no idea you could freeze them and reuse!! And thanks for the tip about where to buy